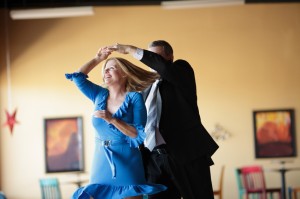 Who would have thought that something that brings as much fun and excitement as social dancing would also aid in mental health? Amazingly, dancing has been proven to help keep the brain healthy and to even protect against dementia!

According to Dr. Kay Judge and Dr. Maxine Barish-Wreden, medical directors from the Sutter Downtown Integrative Medicine program,   “The ability of the brain to change structurally and functionally has been shown to increase and improve as a result of input from dancing. This is literally a “use it or lose it” phenomenon. Because of how our brains must constantly think about the next move literally before the previous one is complete, and how the body has to respond in a timely manner, among all the other things that go on in learning to dance, it is thought that perhaps this greater mental reserve and increased complexity of electrical and/or chemical signals being sent from cell to cell keeps dementia at bay!” In fact, in a study done with Alzheimer’s patients, some were even able to recall forgotten memories when they danced to music they once knew.

In a  21-year study of people aged 75 and older that was led by the Albert Einstein College of Medicine in New York City, funded by the National Institute on Aging, and published in the New England Journal of Medicine, dancing proved to be the greatest risk reduction for warding off Alzheimer’s disease and other dementia. The method in this study for objectively measuring mental keenness in aging was to monitor rates of dementia, including Alzheimer’s disease. In the study, researchers wanted to see if any physical or cognitive recreational activities influenced mental acuity. They discovered that some activities had a significant beneficial effect. Other activities had none. One of the surprises of the study was that almost none of the physical activities appeared to offer any protection against dementia.  There was one important exception: the only physical activity to offer protection against dementia was frequent dancing! Dancing also out-scored the more prescribed cognitive activities such as doing crossword puzzles and reading books. Here are the results comparing the different activities and their effect on reducing the risk of dementia.

• DANCING FREQUENTLY – 76% !!! This was the greatest risk reduction of ANY activity studied, cognitive or physical.

Begin your exciting journey into social dancing today with Dance FX Studios’ Introductory Offer. With customized dance instruction designed just for you and your goals, your brain and body will thank you for it!