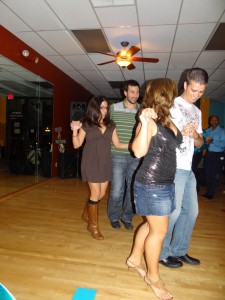 Country Western two step is known as a traditional and very American-rooted, cowboy style dance. With fun turns and combinations danced to the likes of Conway Twitty and Kenny Rogers, Country Two step is as old as American pie.
Traveling along the dance floor, or along the Line of Dance (LOD), always requires counter-clockwise traveling. The confident reason as to why this occurs counter-clockwise as opposed to clockwise is unknown. One theory is that the travel moves to the left because the right side was the power position. From the queen to the ranking of military members, the person on the right is viewed as the most respected. It is also believed that if the line of dance was clockwise, the larger male bodies would block the audience’s view of the female dancers.
This type of partner dancing involves a basic step which occupies 6 beat of music; 2 ‘quick’ steps and 2 ‘slow’ steps. This is the typical timing for most social dancing.
So why does “two-step” dancing earn the most literal name? The waltz, in fact, appears to be the original dance style to carry the moniker.  The “valse a deux temps”, or two beat waltz, was an early 1800’s dance style rejection because many felt that it was too jerky to be enjoyable.  Not until 47 years later did Henri Cellarius lament over the terminology, stating that the term “deux temps” would be better accepted if it were called “deux pas” (two step). The dance style as we know today then actually transitioned into a dance similar to the foxtrot around the 1920’s. From this creation we now have adapted our current version of the two step!
https://dancefxstudios.com/wp-content/uploads/2016/11/dancefxstudios-logo.png 0 0 Sierra https://dancefxstudios.com/wp-content/uploads/2016/11/dancefxstudios-logo.png Sierra2011-12-29 17:27:262012-10-05 18:48:39Where Country Two Step Got It’s Name

A Social Dance Studio in the Phoenix Valley – Made for Dancing!